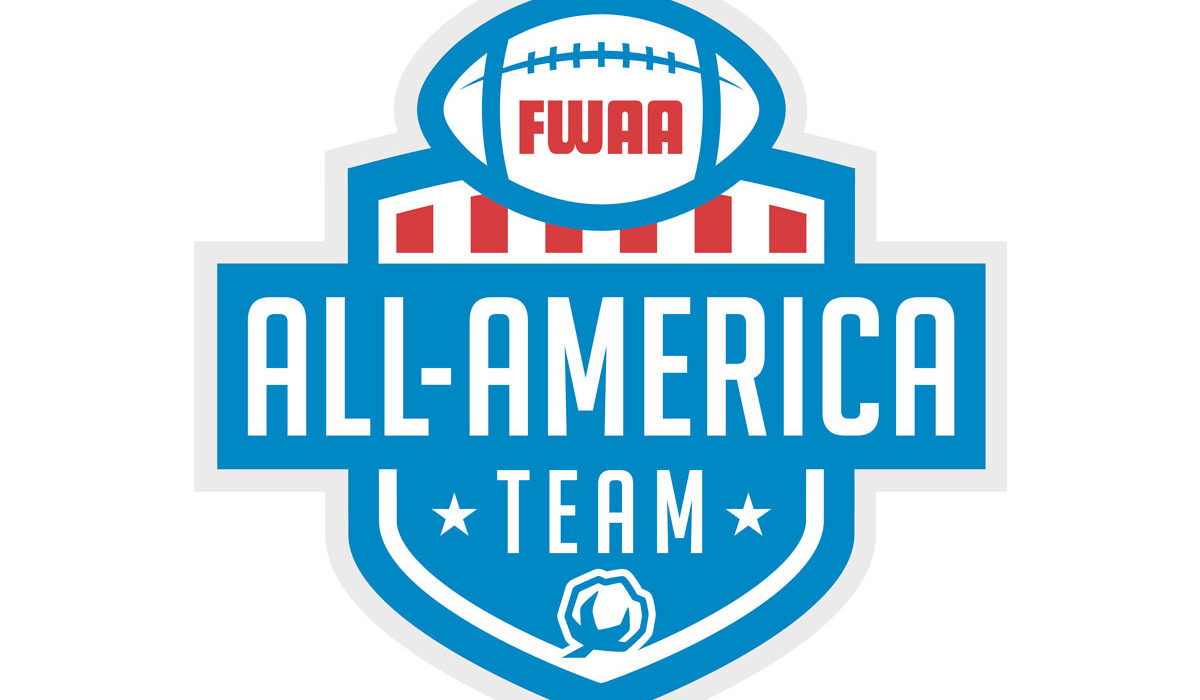 DALLAS – The 2020 Football Writers Association of America All-America Team, presented in partnership with the Goodyear Cotton Bowl Classic, is headlined by five players from Alabama on the first team and more than half the first team coming from the Atlantic Coast and Southeastern Conferences. There are 19 schools represented from eight Football Bowl Subdivision conferences on the first team, including 10 players who are competing in the College Football Playoff later this week.

The Goodyear Cotton Bowl Classic is presenting the All-America Team as part of what has been a season-long campaign to promote the 77-year history of this prestigious honor. Each All-American will receive a commemorative football and the first-team selections will be presented with a custom All-America watch.

“Serving in the role of presenting sponsor of the FWAA’s prestigious All-America team is the perfect fit for the both of us,” said Bry Patton, the chairman of the Cotton Bowl Athletic Association and Cotton Bowl Foundation. “The Goodyear Cotton Bowl and the nation’s writers and broadcasters have shared a lot of special moments over eight decades. We are proud of this relationship and look forward to doing our part in promoting these deserving student-athletes.”

Since 1945, the FWAA team has been among the five used in the NCAA’s selection of an annual consensus All-America team in college football. Since the 2002 season, the American Football Coaches Association (AFCA), The Associated Press, The Sporting News and the Walter Camp Football Foundation have joined the FWAA as the five designated selectors by the NCAA.

Alabama has four players on the first-team offense – wide receiver DeVonta Smith, running back Najee Harris, center Landon Dickerson and Outland Trophy finalist offensive lineman Alex Leatherwood – marking the first time since the FWAA All-America team broke into specialized backfield positions in 1967 for one school to post four players on either side of the ball. Add in defensive back Patrick Surtain II, and only two other teams have ever placed five or more players on the first team as the Crimson Tide match their 2011 national title team with five, leaving the six from Oklahoma’s 2003 BCS-runner-up squad still holding the FWAA record.

The Crimson Tide’s six players on the combined first and second teams tie that 2003 Oklahoma team and Army’s 1946 team as the most for one team in one season.

Clemson’s Trevor Lawrence and Travis Etienne make their first-team debuts on the 2020 squad and the four College Football Playoff teams occupy 10 of the 27 first-team slots. Etienne was selected as the all-purpose player after earning second-team running back spots the past two seasons. Clemson’s opponent, Ohio State, has guard Wyatt Davis back on the offensive line after a second-team spot last year – Etienne and Davis are the only repeat members from the combined 2019 All-America team with no first-teamers back on the 2020 squad.

Iowa State was the only program not in the College Football Playoff to place two on the first team with Breece Hall, who led the nation in rushing during the regular season, at running back along with defensive lineman JaQuan Bailey. It’s the first time for Iowa State to have two All-Americans in the same season. No one caught more touchdown passes than wide receiver Jaelon Darden, who completes the first-team offense as the first North Texas player to ever earn first-team All-America status.

Linebacker Zaven Collins, the Bronko Nagurski Trophy winner, headlines the defense as Tulsa’s first All-America pick since 1991. Defensive lineman Tarron Jackson is Coastal Carolina’s first selection and joins Outland Trophy finalist Daviyon Nixon of Iowa at the front of the defense. Linebacker Joseph Ossai is Texas’ first honoree since 2017, Cincinnati cornerback Ahmad Gardner is only his school’s second All-American on defense and Indiana cornerback Tiawan Mullen is the Hoosiers’ first selection to play defense and its first of any kind since 2015.

The two return specialists were Boise State’s Avery Williams on kickoffs and Houston’s Marcus Jones on punts. Williams is only the third first-teamer in Boise State history and Jones gives The American Athletic Conference three first-teamers in a single season for the first time in its history.

On the second team is quarterback Mac Jones, who completes Alabama’s tie for the FWAA’s single-season honoree record, and an Ohio State duo in wide receiver Garrett Wilson and safety Shaun Wade. BYU offensive lineman Brady Christiansen becomes the Cougars’ first All-American since 2001. Two 1,000-yard rushers earned spots – UTSA’s Sincere McCormick is the first honoree in his program’s history and Buffalo’s Jaret Patterson, along with offensive lineman Kayode Awosika are Buffalo’s first selections since 2013 and its first on offense.

The Pac-12 has two second-team honorees with Oregon’s Kayvon Thibodeaux on the defensive line and Colorado linebacker Nate Landman. Also on the second team is defensive back Greg Newsome of Northwestern, the Wildcats’ first selection since 2012 and its first on defense since now-head coach Pat Fitzgerald was a two-time linebacker honoree in 1995-96. Patrick Johnson, the national sack leader in the regular season, is Tulane’s first All-American since 2012 and its first on defense. West Virginia was one of nine schools to have at least two honorees with its pair of defenders in lineman Darius Stills and safety Tykee Smith. Marshall linebacker Tavante Beckett is his school’s first selection since 2011 and Trevon Moehrig gives TCU a selection in the secondary in back-to-back seasons. Miami defensive lineman Jaelen Phillips gives the Hurricanes a pair of honorees on the combined team for the first time since 2003.

The combined 54-man teams represent 39 schools from all 10 FBS conferences plus one independent and hail from half the country – their hometowns are in 26 states led by nine from Texas, eight from Florida and six from California. It is heavily-laden with seniors, who occupy almost half (23) the spots, followed by 19 juniors and 12 sophomores. There are no freshmen on the combined team.

The FWAA’s All-America Committee selected this 77th annual team based on nominations from the entire membership. This is just the eighth season in the modern era (post-1950) that the FWAA has named a second team. The FWAA also selected an all-purpose player for a fourth consecutive year, which made for a 54-man full team.