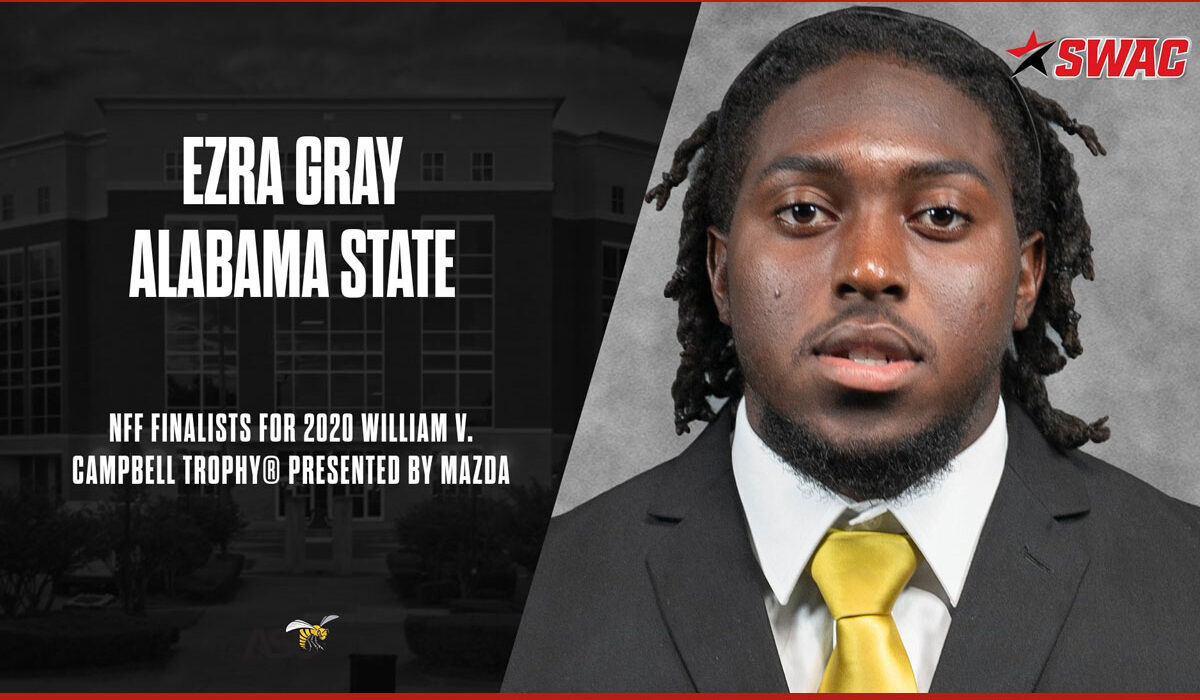 Alabama State student-athlete Ezra Gray was among the 12 finalists named for the award. The 12 finalists will each receive an $18,000 postgraduate scholarship as a member of the 2020 NFF National Scholar-Athlete Class Presented by Fidelity Investments.

Later this year, one member of the class will be declared the winner of the 31st William V. Campbell Trophy® Presented by Mazda and have his postgraduate scholarship increased to $25,000.

Selected from a record 199 semifinalists nationwide from among all NCAA divisions and the NAIA, the 12 finalists are:

“We are extremely proud to announce the finalists for this year’s Campbell Trophy® Presented by Mazda,” said NFF President & CEO Steve Hatchell. “These young men have an unrelenting commitment to excellence in all aspects of their lives, and they represent all that is right in college football. As strong leaders in the vein of the trophy’s namesakeBill Campbell, they all serve as living examples that the Future for Football is bright. We are excited to honor their hard work and outstanding leadership with postgraduate scholarships.”

Submitted by their schools, which are limited to one nominee each, candidates for the Campbell Trophy® Presented by Mazda must be a senior or graduate student in their final year of playing eligibility, have a GPA of at least 3.2 on a 4.0 scale, have outstanding football ability as a first team player or significant contributor and have demonstrated strong leadership and citizenship.

“The NFF Awards Committee did an excellent job in selecting this year’s National Scholar-Athletes,” said NFF Chairman Archie Manning, whose sons Peyton (Campbell Trophy® recipient) and Eli were NFF National Scholar-Athletes in 1997 and 2003, respectively. “Selected from a record number of impressive semifinalists, they should be extremely proud of their accomplishments, as they have undoubtedly distinguished themselves as some of the best student-athletes in the country. Each of these men is also a leader on and off the field, and we know that they have only begun to reach their potential.”

The past recipients of the Campbell Trophy® Presented by Mazda, include:

Named in honor of the late Bill Campbell, the trophy has been prominently displayed inside its official home at the New York Athletic Club since 2013.

An All-Ivy League player and the captain of Columbia’s 1961 Ivy League championship team, Bill Campbell found his true calling after an unlikely career change at age 39 from Columbia football coach to advertising executive. His ability to recruit, develop and manage talented executives – all lessons learned on the gridiron – proved to be a critical component of his ability to inspire his business teams to the highest levels of success.

An all-conference running back who earned his degree with a perfect 4.00 GPA, Ezra Gray has taken full advantage of his time on and off the gridiron at Alabama State. The Lynn Haven, Florida, native becomes the Hornets’ second NFF National Scholar-Athlete, and the program’s first in almost 30 years.

Gray has played in 31 games and was a team captain during the 2019 season. He has rushed for 1,372 yards and six touchdowns on 341 carries during his career while adding 37 receptions for 246 yards and another touchdown. Gray led the Hornets in rushing in both 2019 and 2018.

A two-time All-SWAC selection as a return specialist, Gray has returned 44 kicks for an average of 23.93 yards. He led the conference with a 24.1 kick return average on 14 returns. The SWAC plans on playing a spring football schedule beginning in February.

Active off the field, Gray has assisted with Alabama State’s campus move-in day each year. He has also served food at the Salvation Army during the holidays, and he reads to elementary school children.