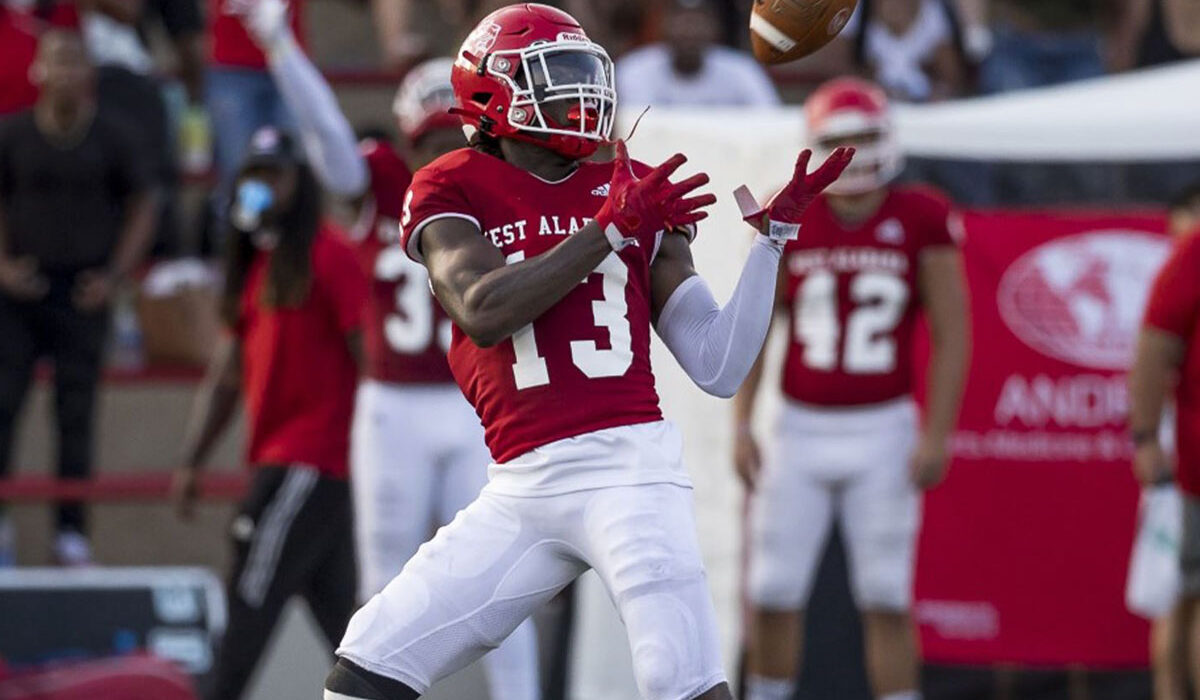 LIVINGSTON – Jack McDaniels passed for 344 yards, and four touchdowns as West Alabama opened its 2021 season with a 48-7 victory over Morehouse College on Saturday at Tiger Stadium.

Graduate Student Darius Nalls had 200 receiving yards in the game with nine receptions and two touchdowns, while senior Reggie Davenport netted 111 yards on the ground.

UWA had 550 yards of total offense in its first game after the abbreviate spring season. The Tigers finished with 344 passing yards and 206 on the ground.

The West Alabama defense was firing on all cylinders Saturday evening. The Tigers held the Maroon Tigers to 131 total yards (98 passing, 33 rushing), keeping Morehouse scoreless for the first half and allowing only one touchdown in the second.

“I thought we came out the first half and really established ourselves and did things that put us in a good situation especially early on,” said head coach Brett Gilliland of the victory. “The defense had several three and outs back-to-back, at least four. The offense had a couple of good drives pretty early. We just have to get better with consistency and having that same intensity regardless of what’s going on.”

West Alabama took the opening kick-off after Morehouse won the toss and deferred to the second half. UWA marched the ball down the field, and after 10 plays and 63 yards, the Tigers found themselves in a 4thand 10 situation. A 28-yard field goal attempt was missed wide to end the drive.

Morehouse took its first possession of the game but came up hard against the D-Block. MC punted after three plays for just four yards, and UWA took control on its 31-yard line.

West Alabama took advantage of the quick turnaround, going 63-yards in six plays. A four-yard carry by James Smith, III punctuated the drive for a touchdown. Senior kicker Gabriel Dunkle added the PAT for the 7-0 lead with 7:33 left in the period.

UWA extended its lead in the second quarter, scoring three additional touchdowns and a field goal before the close of the half.

In the fifth possession of the period, the Tigers made it to the end zone in five plays for 76 yards. Closing the drive, Underwood carried for two yards for the touchdown, and Dunkle stuck the extra point.

At 6:07, West Alabama started another scoring drive that concluded with a 40-yard field goal by Dunkle to give UWA a 17-0 advantage.

Morehouse fumbled the punt return on the next drive, and senior Terrance Carter recovered for West Al on MC’s 17. After a first down incomplete pass, McDaniels connected with Darius Nalls in the endzone for his first touchdown as a member of the UWA squad. The Tigers claim the extra point for a score of 24-0.

After another Morehouse punt, the Tigers scored again. McDaniels completed a 33-yard pass to Smiley Martin for the touchdown and West Alabama closed the half up 31-0.

Early in the third quarter, West Alabama scored again. McDaniels connected with Nalls for a 30-yard touchdown pass for his second of the game. Dunkle’s PAT made it a 38-0 game.

With the new possession, Morehouse recorded its first points of the game. The Maroon Tigers found the endzone in nine plays for 84 yards to cut UWA’s lead to 38-7.

The Tigers answered with a 6-play, 26-yard drive to score. This time, McDaniels connected with wide receiver Bayley Blanchard for the 16-yard touchdown pass for the last TD of the game.

In the game’s final quarter, UWA added three points on a 39-yard field goal by Dunkle to end the game with the 48-8 victory.

Looking to their next opponent, Coach Gilliland said, “We have a lot to fix on special teams and some things to tweak on offense and defense. But these things are fun to fix after a 48-7 win.”

UWA football returns to field on Saturday, Sept. 11 when it travels to Tuskegee, Ala. to face the Tigers of Tuskegee University. Kickoff is set for 1 p.m.